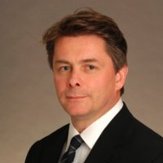 Robert M. Fotheringham (首席执行官: 方伯汉) is a Co-Founding Partner and CEO of Fotheringham & Fang Group Inc. ("FFG"), a proprietary securities trading and private equity investment firm. The Group is focused on creating value and funding growth in a broad spectrum of industries and geographies, including Asia, Europe and Eurasia.

In addition to overseeing his company's international business, Robert Fotheringham serves as a Director on a number of the Boards of public and private companies involved in a variety of businesses, including financial technology, professional associations, business services, food manufacturing, regulated and unregulated management companies and investment vehicles. Robert was recently elected as the First Vice President of the Hong Kong Canada Business Association, where he has served as the Member of the Board of Directors since 2015.
Robert is an honorary member of the Business Advisory Board of the University of Toronto – Li Koon Chun Finance Learning Centre.

Before leading trading operations and business development for the preeminent National Group of Exchanges, Robert built a successful career at one of the largest Canadian Pension Funds, the Ontario Municipal Employees Retirement System (OMERS), where he served as the Vice President, Derivative and Quantitative Investments for nearly a decade. The notional value of the derivative portfolio under his management exceeded $6.0 billion and cash quantitative based portfolio assets exceeded $3.0 billion. Mr. Fotheringham served as a senior member of OMERS’ Investment Management Committee and Global Tactical Asset Allocation Committee, where he developed the Fund’s asset allocation strategies and risk management initiatives.

Prior to joining OMERS, Mr. Fotheringham managed investment portfolios of the of the Hamilton-Wentworth Retirement Fund, the Hamilton Street Railway Pension Fund, the Regional Trust and Sinking Fund as the Director – Senior Portfolio Manager for the Regional Municipality of Hamilton-Wentworth. His global investment mandate included public and private investments in both emerging and developed markets. Mr. Fotheringham was also a senior member of the Municipality’s Investment Strategy Committee.

In his career, Mr. Fotheringham served on the Board of Directors for The Canadian Depository for Securities (CDS) Group of Companies, the CDS Audit/Risk Committee, and Certified General Accountants of Ontario’s Board of Governors (CPA).  He is the honorary member of the Board of Governors for the Chinese Cultural Centre.

Robert is a Chartered Professional Accountant. He holds the CPA, CGA designation.  He resides in Toronto, ON, but often travels to represent the company on business missions abroad.